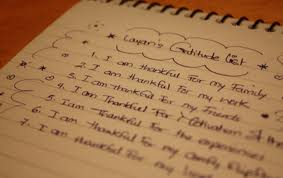 The reason I ask is because I used to work in a psychiatric rehabilitation facility as a residential manager. The residents would often come to me with  complaints. I made it my habit to receive them with a kind but clear challenge: They could complain all they wanted, if first they would write a list of 10 things for which they were grateful.

There were 15 severely mentally ill residents living in the “casa” (Spanish for home) with about the same number of staff caring for them. Working there was a challenge at times and also an honor.

One resident – who I’ll call “James” – was diagnosed with schizophrenia and had a lot to be miserable about. He would come to me on a regular basis with an expression on his face that said, “I’m really unhappy and you’re going to hear about it.” I would receive him with a smile and say, “James, you know how it goes…” and hand him a piece of paper and pen. He’d give me this HUGE toothy grin and take the paper and pen. He’d sit down at the table outside my office and compose his gratitude list. When he was finished, he’d approach the door of my office and motion to ask if he could come in.

For whatever reason, James and I got along very well (this was not the case with most of the other staff members). He appreciated that I was respectful with him and would make an effort to problem solve in a positive way. And more often than not, he’d respond to me with that big smile – despite his very challenging circumstances.

He’d come into my office and I’d ask him if he’d like to share his gratitude list. He always would. Sharing those 10 items had the effect of putting his complaints into perspective. Sometimes after he’d read to me he’d even say, “Ahhh forget about it… I guess things aren’t so bad. See ya later.”

I always remember the effect that writing and sharing a gratitude list had on James – and the other residents. The thought of it makes me feel happy more than 10 years later.

It’s why I ask: Written a gratitude list lately?

It’s a habit of mine that has benefited me enormously. I can easily correlate good days with ones that I’ve taken time to make a list – mental or written – of things for which I feel grateful. I believe this is a key for organizing for peaceful personal growth.