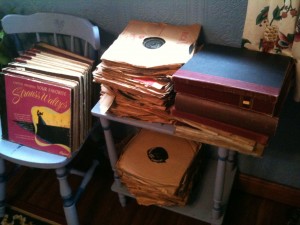 It is sometimes not easy to let go.

When I’m organizing with people, the first step is to let go of what’s not needed any longer.

One dynamic I encounter is: You feel you haven’t gotten the value out of your items.

Organizing is a physical, mental and emotional experience. People sometimes tell me they think they should hang onto items until they use them, or use them enough. Sometimes these ideas are more a fantasy than a reality. When organizing, I often encounter people’s unfulfilled or un-lived dreams.

“Depression era mentality” can also be related to a dynamic called “poverty consciousness” (both terms used with the utmost respect). This often occurs in people who have struggled to meet their needs and don’t trust there will be enough.

Sometimes, in spite of these dynamics, there comes a time you need to let go…

And there’s the other end of the continuum, which is people who “throw the baby out with the bathwater.” These are the folks who get sick and tired of the clutter around them – often it’s clutter others have created – and, at their wits end, pull open a drawer and empty all of its contents into the garbage. I have witnessed this. There’s no checking for what might be recycled or repurposed or (heaven’s no!) repaired. There’s pretty much just anger and finality. They’ve reached the last straw.

What I suggest is taking a deep breath and a bit of time to get clear and calm before beginning organizing, then thoughtfully sort through items and let go.

More on this subject next week.