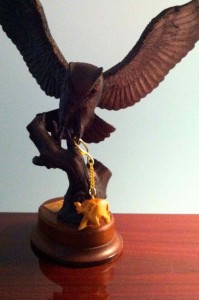 Once upon a time there was a beautiful bird that flew far away from home. She ventured into an area of the world that was colder than she’d previously known, and found a big pile of steamy dung into which she nestled, to warm herself. (Sorry 🙂 ).

She was cozy and safe, and in a short amount of time she got used to the smell. However, there was something missing. She was meant to fly, not hang out in a cow pie.

The problem was, this lovely bird never intended to face the unknown, and she was scared.

She breathed deeply, pondered the nature of reality, and finally summoned up the courage to fly. She had an awesome adventure. And, of course, that’s what life’s all about…

So, if you’re organizing, and find yourself stuck in a rut, why not ask yourself if you’re satisfied. Are you fulfilled? Are you living to your potential? Or have you “settled” because the situation has become familiar?

When you start organizing your physical space, it can be challenging because it stirs up the mental and emotional roots that caused the disorganization to begin with: your thoughts, memories, feelings, and habits. Even if you’re not satisfied with the way things are, and they aren’t working well, supporting you effectively, or moving you forward, you get used to them being a certain way.

The solution? Acknowledge what you’re feeling then take some constructive actions. I believe in applying a bit of elbow grease and shoe leather to organizing projects. I’m a little “old school,” I guess. The thing is, by taking time and making an effort to organize yourself, you will move forward more effectively.

Usually I’ve found it’s the thought of organizing that’s worse than the project itself. It’s like that hurdle you get past when you go to the gym. You’ve never worked out and thought, “Well, that was a big waste of time.” No way! You always think, “Yay!! I did it!”

I started with a bird and I’ll end with an elephant. How do you eat an elephant? One bite at a time. And that’s how it is with organizing.