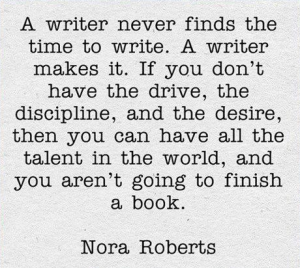 The next strategy for organizing your writing life is…

To effectively organize your writing projects, take time to clearly label notes, documents, and folders. Whether you’re using a computer, paper notes, or both, take time to label everything clearly, and store your writing so you’ll know where it is next time. Before storing it, ask yourself, “Where will I look for this next time?”

The more conscious (aware, deliberate — whatever you call it) you are in how and where you store your writing thoughts, the easier it will be to retrieve them when you are ready to focus on your project.

If you don’t take time to organize yourself — especially when juggling multiple projects with multiple tasks — you’ll probably waste time trying to find something later. But don’t go overboard and meticulously organize, as this can be a way of procrastinating.

Get in the habit of carrying a small notebook with you,, and use separate pages to record notes on different projects. That way you can easily put them in different folders. For example, if you are waiting in the car and have an idea, jot it down in the notebook or on a piece of paper, and put it in your wallet or purse. When you return home, put it in the folder you’ve created for that project. If you use a smart phone, take the same approach, don’t mix notes. Also, always be complete and clear so you’re able to understand the note or idea later.

If in some moments you feel overwhelmed with the task, or make mistakes, remember what Henry Ford said, “Success is 99% failure.”